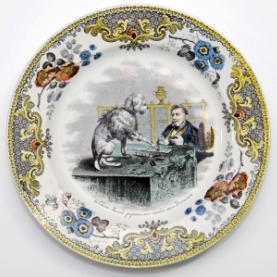 One of our recent tweets  featured an illustration of a dog playing dominos.

This was taken from  Dog breaking: the most expeditious, certain, and easy method: whether great excellence or only mediocrity is required by Lieutenant Colonel W.N Hutchinson, (John Murray 1850.) The image shows a dog playing dominos with its owner Monsieur Leonard surrounded by a crowd of onlookers.

In the Historical Collection we have another image of a dog playing dominos, this time on a plate which was generously donated by Norman Comben in September 2011, the inscription reads: “Chien Munito gagnant son maitre aux dominoes.”

Munito, known as the ‘Learned Dog’, was first shown by Signor Castelli in London in 1817 before touring in Europe. As well as playing dominos he excelled at picking out playing cards and performing arithmetic.

It would appear that his performances were unforgettable.  In All the year round 26 January 1867 Charles Dickens writes:

“About 45 years ago, a learned dog was exhibited in Piccadilly –  Munito … He performed many curious feats, answering questions, telling the hour of the day … picking out any cards called for from a pack on the ground.”

Puzzling over how these feats could be explained Dickens returned a second time and discovered the secret.

“We watched more narrowly … noticed that between each feat the master gave the dog some small bits … of food, and that there was a faint smell of aniseed from that corner of the room.”

Dickens believed that as the owner set out the cards, he pressed his thumb on the chosen card impregnating it with the scent of aniseed which Munito had been trained to recognise.  He confronted Signor Castelli after the show, when all the audience had left, with this explanation.  Signor Castelli ‘did not deny the discovery.’

Munito also appears in Dick Sand by Jules Verne (published 1878) where the explanation of the feats is based on Munito being trained to respond to sound rather than  smell.

Whatever the explanation for these ‘tricks’ Hutchinson sums it up rather neatly “It is hard to imagine what it would be impossible to teach a dog, did the attainment of the required accomplishment sufficiently recompense the instructor’s trouble.”

Some things in life are free!

Reading for Pleasure
Scroll to top