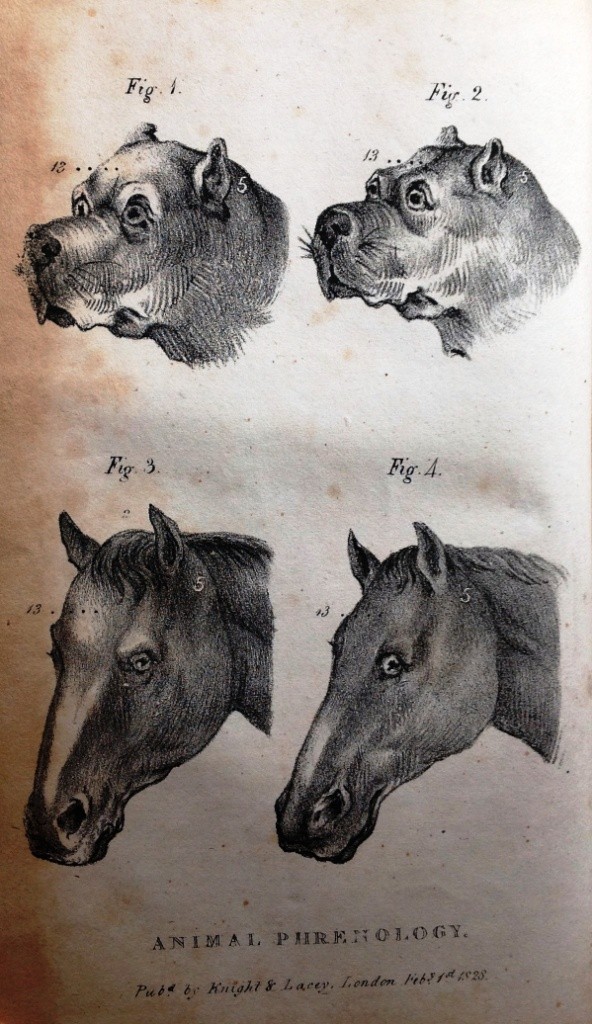 In January 1828 the first two British veterinary journals started, these were The Veterinarian and the much shorter lived Farrier and naturalist. Both owed their origins to a desire to comment, and pass critical judgement, on the state of affairs at the London veterinary college. The  Farrier and naturalist is generally believed to be the work of Bracy Clark – it certainly contains a number of unattributed articles that had either previously been, or were later to be, published with Clark as the author.   One of these is ‘A short history of the celebrated racehorse Eclipse’.

The article opens with a brief introduction to the ‘science of Phrenology’ and the work of Drs Franz Joseph Gall and Johann Gaspar Spurzheim.   Stating that:

“[Phrenology] is being now approved of and encouraged by men of the highest talents and abilities … we therefore wish to call the attention of our readers to its very great importance … in judging of the character, habits and capacities of different animals.

“A knowledge of Phrenology is of vast importance, as in all cases it will be found that an animal’s courage … sagacity, shyness, meekness, and general temper will depend entirely on the brain; and as this organ is more or less developed, in particular parts, so will the character be found … to correspond to the outward indications of the skull.”

Having set the scene and, hopefully, convinced the reader of the usefulness of Phrenology, the author goes on to describe what Dr Spurzheim found when he examined Eclipse’s skull –apparently Dr S not being a sportsman was not even acquainted with the name of ‘this matchless horse”!

So what did he find?

“A remarkably large brain… strongly indicating great and high courage, unusual sagacity, but deficiency in meekness, or rather a vicious temper”

The author ends by stating that “these peculiarities in his character and disposition will be immediately seen on referring to his history… and the remarkable correctness of the Dr’s observations may serve to show that this science will prove eminently useful in judging of the living animal.”

Secretiveness – propensity, to conceal , or cunning. “where this part of the organ is found large and active in … the Fox….the dog … and the cat, when watching the mouse”

Melody – or tune where “the heads and skulls of birds which sing, and of those which do not sing … present conspicuous differences at the place of this organ.”

According to the article in 1828 you could buy a cast of Eclipse’s skull, with the marked organs, from a Mr Deville 367 Strand.   I wonder if any still exist  so we can investigate further?

Looking forwards, looking back – a Beaumont connection
We use cookies to ensure that we give you the best experience on our website. If you continue to use this site we will assume that you are happy with it.OkRead our Cookie Policy
Scroll to top